With the ice fall open again, teams began the process of supplying their camps at Camp 1 (just above the ice fall, and camp 2, in the Western Cwm. ( Cwm being a Welsh word for “Valley”) I was able to sit in our dining tent and watch the ant like figures as they made their way through the ice fall. That ice fall is big and must take climbers at least 6 – 7 hours to pass through before exiting on the Western Cwm.

However, we had some drama today! I woke up this morning at about 5.30am to the voices of Sherpa’s around us. By the tone, and the length of the discussions on the radio, it sounded serious. Certainly nor just a morning greeting!! I got up and met our liaison officer, Passang, outside. Each Everest expedition is assigned a Liaison Officer. This person is appointed by the Nepalese government and overseas the expeditions experience at Everest. Any issues are directed through him, and visa verse.

Passang on the radio to the helicopter

Passang was in contact with our Sherpa team high up on the Western Cwm. When I asked him what was going on. He told me that Ang Kami, our Camp 2 cook, had taken a fall and had a suspected broken leg! I went to the coms tent and turned on our primary radio to pick up on what was happening high up on the mountain. With Ang Kami Sherpa unable to move, we needed to get a helicopter in and get him casavaced out! Passang took control and arranged for the helicopter. In the meantime Ongchhu and the other 2 Sherpa’s were keeping Kami as comfortable and warm as possible. Ongchhu had managed to strap up his leg, using an ice axe and rope to stabilize his leg. However, at this stage we knew no details of the fall.

Sean and I then made our way towards the heli pad and met others involved in the rescue operation. At about 9am, the helicopter finally arrived and after a short stop off for details, took off in the direction of the ice fall and up to the Western Cwm. 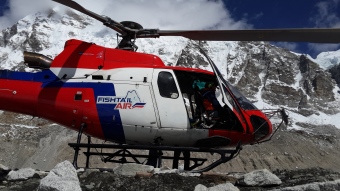 Not 10 minutes later, he was back, with Kami in the back. I managed to get up to the chopper and shake Kami’s hand. He signaled to me a broken knee or leg. It was obviously difficult to get full details, but Kami needed a hospital, quickly. With that, they took off again and headed down the valley towards the nearest hospital, perhaps even Kathmandu. 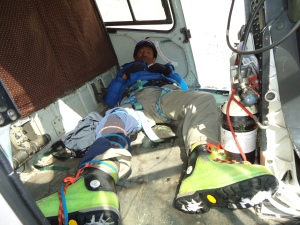 Ang Kami in the back of the chopper. Note his right leg!

Feedback later received was that Kami had infact fractured his right leg just below the knee. He was taken to The Helping Hands Hospital in Kathmandu, where he was operated on. Reports to date say he is doing fine, but his climbing season is over!!

With Kami now out the expedition, we will await feedback as to who will be replacing Kami as camp 2 cook.

5 thoughts on “Drama for the SA Team!”